A nine-year-old from Hyderabad has earned himself two international laurels for solving Pyraminxs in his own unique ways in record time.
The young record holder, SP Shankar, also holds one national award for solving a Rubix cuPyraminxsbe. 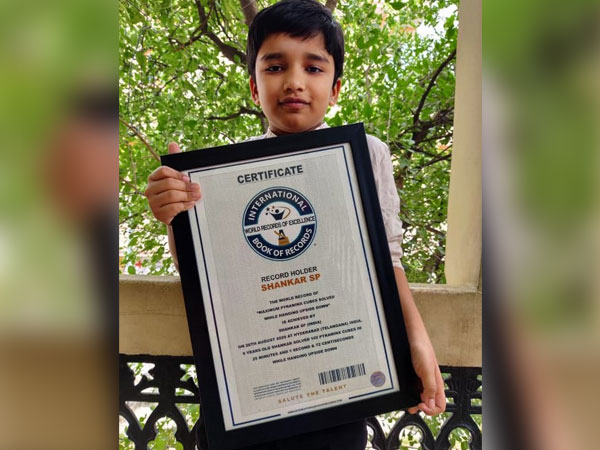 According to Divya Mangala, Shankar’s mother, the young boy had picked up the popular puzzle at the age of six and was constantly seen with a cube in his hand.
“I am so proud that Shankar has achieved two World Records and a Limca Book of Records entry at such a tender age. He started cubing at the age of six, and just three years later, he has been able to achieve two world records,” she said.

“Every day and night he has a cube in his hand. When he started cubing, he could solve only one side. Eventually, he was able to solve all sides and started speedcubing. Now he is able to solve a megamix (a type of Rubik’s Cube with 12 faces),” Mangala added.
She also proudly stated that Shankar could solve them underwater, while suspended upside down, and while inline skating.

“I used to receive a lot of backlash from his teachers that he concentrates more on cubing than his studies. But I think that is okay. I homeschool him now. Every day he chants a part of the Yajurveda and learns violin,” she added.

Subramanyam, father of Shankar said, “He watches several YouTube videos on speedcubing. The initial interest came when he got a cube as his birthday gift earlier this year. To improve his speed he got special training from experts.”

He added, “Incidentally, he is also a good skater so he attempted the record. Similarly, he showed interest in attempting to solve Pyraminx while suspending himself upside down. We were hesitant at first but seeing his increasing interest, we encouraged him and now he has set two world records.”

Hyderabad to get respite from scorching sun

GHMC focuses on the maintenance of sports facilities

ICRISAT gets nod to use drones for agri research work