Hyderabad: They say it is the journey that matters and not the destination. And if that is the case, the roads too matter. In Hyderabad, for the last seven years, the journeys have been an entirely different experience.

True, there have been a few bumps here and there, but on the whole, the city’s roads have undergone a vast change, with the Greater Hyderabad Municipal Corporation (GHMC) helming the transformational journey. With at least a dozen flyovers in different parts of the city, link roads, restored main roads, scores of lung spaces and rejuvenated monuments, the city has been buzzing with nonstop activity.

Among the many initiatives that transformed Hyderabad, the Strategic Road Development Plan (SRDP) can be considered a prominent one. A series of flyovers, underpasses, Rail over Bridges (ROBs), Rail under Bridges (RUBs) were built under the programme. Even as infrastructure was being developed to decongest the city, main roads were restored simultaneously under the Comprehensive Road Maintenance Programme (CRMP). To further reduce traffic density on main roads, new link roads were developed.

And last year, with an eye on tackling the emerging threat of urban flooding, an exclusive wing to resolve the inundation of low-lying areas and the waterlogging on roads was set up by Municipal Administration and Urban Development Minister KT Rama Rao.

On the other hand, while the city was undergoing a major infrastructural metamorphosis, GHMC records reveal that Hyderabad did not turn into a concrete jungle. Dozens of theme parks including a one-of-its-kind dog park was developed, while many open lands that were once dumping grounds were converted into lung spaces. Retaining biodiversity was always on the priority list as the city progressed. As part of the exercise, an assets protection cell too was set up to save water bodies and lung spaces.

On Monday, MAUD Principal Secretary Arvind Kumar inspected three flyovers and a railway over bridge (RoB) in the IT corridor being constructed under SRDP. In a tweet, he mentioned that MAUD Minister KT Rama Rao wanted the works to be paced up during the lockdown period. 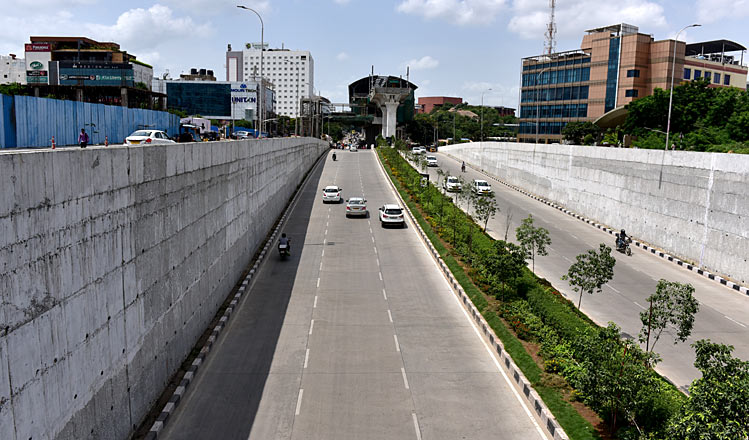 A whopping Rs 1,010.77 crore has already been spent to build flyovers and underpasses under the SRDP. The works include nine flyovers, four underpasses, three Road over Bridges/Road Under Bridges and the cable-stayed bridge across Durgam Cheruvu. As of date, 20 infrastructure projects are progressing at a cost of Rs 4,741.97 crore and officials of line departments are preparing a detailed project report for 12 works, the cost of which add up to Rs 12,044 crore.

Under the Comprehensive Road Maintenance Programme (CRMP), 341-km of main road stretches were recarpeted till date. Around Rs 400 crore was spent on CRMP works till date.

The Strategic Nala Development Plan (SNDP) wing prepared detailed proposals worth Rs 858 crore to develop, strengthen and maintain the stormwater drain network in the city. Works have already commenced in parts of the city and will be executed in a phased manner.

Muse Wearables gets funding from KIMS Hospitals founder, others

Meet this little wonder who’s a Grand Master in writing