When the price of tomatoes fell below Rs 2 per kilogram, Nagamani last week decided to plow off the field and not bother to pluck the fruit. A recipient of the uttama rhythm (model farmer) award in 2014, she figured that there was no way she would cover even the input costs.

“No one cares for the farmer’s woes. We put all that we have on our fields expecting some returns. And then, the market is never in our favor. Those who cannot sustain are on the verge of leaving their farms,” Nagamani told indianexpress.com over the phone. An independent farmer since 2009, she cultivates sweet lemons, tomatoes, papayas, and drumsticks on 35 acres and employs 50-odd workers.

But over the weekend, things changed drastically. All her produce was purchased by a group of IT professionals from Hyderabad who sold off the entire stock at Rs 15 per kg in the city. The group of volunteers, affiliated with the Forum of IT Professionals (ForIT), sold over four tonnes of tomatoes promising to compensate the farmer with the entire proceeds.

“When our products could not get us even Rs 2 per kg, these youngsters have offered Rs 15 per kg. I am more than happy. The farmer today needs the support of people more than anything,” she said. 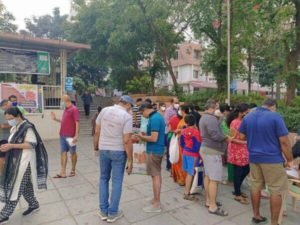 The tomatoes procured by ForIT from Nalgonda were sold in eight to nine localities from Uppal, Vanasthalipuram to Kukatpally and Miyapur, HiTec city, Gachibowli, BHEL township, Attapur, Manikonda, and Patancheruvu, etc.

Kiran Chandra, president of ForIT, said it was painful to know of the farmers who thought it was not even worth plucking the tomatoes because they were not able to get the basic minimum support price for their produce.

“When we figured out by accident that the best farmer awardee, a woman who goes on a scooter to the farm, is the person who is trying to plow her fields off due to lack of support price. When we asked for tomatoes to be sent to the city, their primary concern was transport cost. So we mobilized some money and arranged for a vehicle,” said Chandra.

The first load of 2.1 tonnes arrived on Saturday and all of it was sold in less than half-an-hour at eight to nine localities.

Praveen Chandrahas of ForIT, who sold a few crates of tomatoes at Manikonda, said the entire load was distributed among smaller groups of volunteers who used their vehicles to shift the tomatoes. The word about their initiative to support the farmer was spread in their apartments and neighborhoods through WhatsApp and telegram groups. “The response was so overwhelming. Since we fixed the price at Rs 15 per kg, some people asked us why we weren’t selling at the market price. Many wanted to pay more just to support the farmer,” said Kiran Chandra.

Echoing similar views, Chandrahas added: “We could see that people were enthusiastic to buy even 10 kilos at a go. They understand the cause. Otherwise,
I don’t think anyone requires 10 kilos of tomatoes at home.” They sold 2.1 tonnes of tomatoes on Saturday and another 2 tonnes on Sunday.

“We thought we would do it one time to help the farmer but the response was unbelievable. So many people have told us that they would support us by buying if we continue to do this because it directly benefits the farmers. People are asking us to get other vegetables as well,” said Chandrahas.

The ForIT is mulling to repeat it every week. Chandrahas said they would want to institutionalize this and get more farmers on board, and from different parts of the state. “We will decide on our next executive council meeting. We are working on modalities to see how we can sustain this to benefit the farmers,” added the forum president.

The Indian Express is an English-language Indian daily newspaper. It is published in Mumbai by Indian Express Group. In 1999, eight years after the group's founder Ramnath Goenka's death in 1991, the group was split between the family members.

Farm land digital survey in state to begin from June 11

Women Entrepreneurs Hub in Hyderabad: Nursing the dreams of tomorrow

Summer’s here: Pluck your mangoes from this online store in Hyderabad

Have this sumptuous Biryani for just Rs 10 in Hyderabad