Hyderabad: Is Hyderabad slowly and steadily emerging to be a forerunner in electric mobility? The answer could be yes, with plenty of indications that more people in the city are slowly turning towards electric vehicles.

The huge surge becomes clear when this number is compared to the number of such vehicles a few years ago, as till 2016, the city had only 25 battery-operated vehicles. In just four years, the number has shot up to 4,535, while there were no diesel-electric or petrol-electric vehicles at all. Currently, the TSRTC is also operating 40 fully electric vehicles in the city.

The growth has been such that even with the lockdown, the year 2020 saw the number of battery vehicles go up by 1,360, though the year was not that great for diesel-electric and petrol-electric vehicle sales.

The picture gets all the brighter when we remember that the Telangana Electric Vehicles and Energy Storage policy 2020-2030 is set to drive forward the faster adoption of electric vehicles. Under this policy, the State government has proposed to offer a 100 percent exemption of road tax and registration fee for the first 2 lakh electric two-wheelers purchased and registered within the State.

According to C Ramesh, RTA Joint Transport Commissioner (IT & Vigilance), there is a steady growth in electric mobility and more people will use these vehicles given adequate Electric Vehicle (EV) charging stations.

“A majority of electric vehicles are motorcycles. We hope that 100 percent exemption of road tax and registration fee will encourage the public to adopt electric vehicles, which are environment friendly and save money in the long run,” Ramesh said. 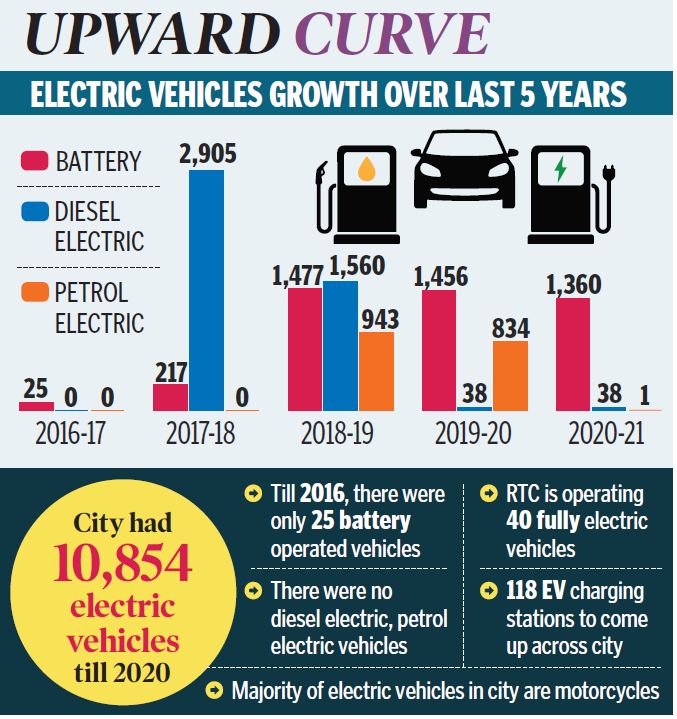 To cater to the rising number of electric vehicles, the Union Ministry of Heavy Industries and Public Enterprises will be setting up 118 EV charging stations across the city.

The approval came under the Faster Adoption and Manufacturing of Hybrid & Electric Vehicles (FAME-India) Scheme, which is aimed at giving a big push to electric vehicles in public transport.

According to Telangana State Renewable Energy Development Corporation Ltd, at present, the city has about 50 EV charging stations. Some of them are at Metro stations, which are being widely used by electric cars of Ola, Uber, and others.

Officials said that it would cost over Rs 30 lakh for establishing EV charging infrastructure. Each public charging station requires an exclusive transformer with all related substation equipment including safety appliances, appropriate civic works, cabling and electric works and should have one or more charger, officials added.

As for the policy, the State government is also encouraging financing institutions to provide hire-purchase schemes at discounted interest rates.

Smart electricity card scheme to be launched in Hyderabad

Mask up Hyderabad: The artists behind the Shamshabad wall art

Hyderabad sees a rise in demand for plotted development projects