TSSPDCL to give real-time power data on phone soon

Hyderabad: Electricity consumers will soon get real-time alerts on the amount of power consumed every day, including appliance-wise data, at their home or in business premises on their mobile phones with the Telangana State Southern Power Distribution Company Limited (TSSPDCL) successfully implementing the Smart Grid Project on a pilot basis in the Jeedimetla Industrial Area.

The TSSPDCL has won accolades from the Central Electricity Regulatory Commission (CERC) — officials of which visited the Jeedimetla Industrial Area and reviewed the progress — for successfully implementing the project.

Under the project, the TSSPDCL installed smart meters at 8,800 domestic and industrial areas parallel to the existing meters. These smart meters each connected to a SIM will provide details to not only consumers but also TSSPDCL officials at their control room and Supervisory Control and Data Acquisition (SCADA). “As of now, we are only getting real-time alerts from these meters,” officials said.

They said these smart meters would help consumers take steps in judiciously utilising power as they get consumption alerts on their mobile phone apart from voltage levels. “Consumers can know hourly and daily details based on which they can take necessary measures,” an official said. 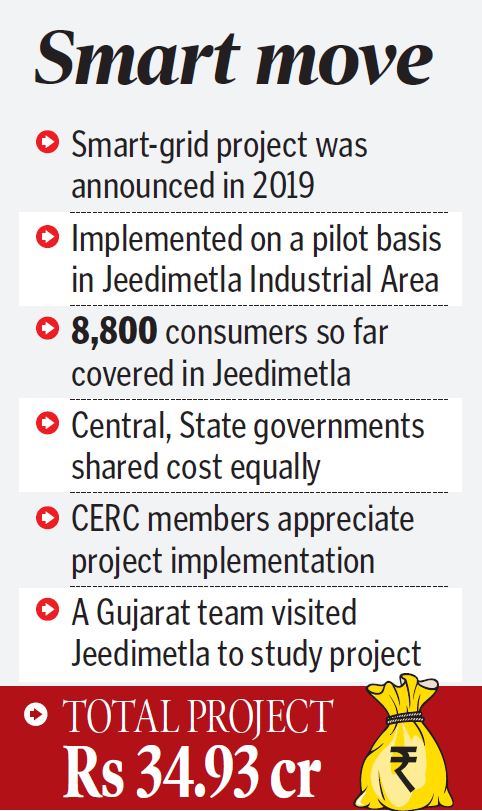 He said the scope for tampering with the meters is nil and explained that the Jeedimetla Industrial Area was selected as it has a large number of domestic and commercial consumers. Another advantage of the project is that the Electricity Department can easily know the exact area of snapped cables with the help of Fault Passage Indicators (FPIs) to immediately rectify the problem and restore the supply.

Earlier, linemen used to struggle to identify 11 KV lines damaged due to trees falling on them especially during monsoon. This would lead to power disruption in the entire area.

One more advantage is that error-free energy auditing, including the load on each transformer, could also be conducted with a series of initiatives taken up under the project.

When contacted, TSSPDCL Jeedimetla DE (Operations) Garuthmanth Raju Thangella said the project was implemented in Jeedimetla on a pilot basis. Both the Central and State governments shared the cost equally. “The CERC members appreciated us for successfully implementing the project. A team from Gujarat also visited our area to study the implementation,” he said.

According to officials, the Smart Grid is an electrical grid with automation, communication and IT systems that can monitor power flows from points of generation to points of consumption even down to appliances level and control the power flow or curtail the load to match generation in real-time.

It helps to monitor, measure and control power flows in real-time that can contribute to the identification of losses so that appropriate technical and managerial actions can be taken.

Muse Wearables gets funding from KIMS Hospitals founder, others

Meet this little wonder who’s a Grand Master in writing