Hyderabad: A fruit theme park, a rainwater harvesting theme park, a dinosaur theme park, and the country’s first dog park are just the beginning. Hyderabad is all set to have more of its unique theme parks, with the Greater Hyderabad Municipal Corporation (GHMC) now proposing to develop 57 theme parks across its limits.

Under this initiative, the municipal corporation has identified 57 parks, in which the new theme parks will be developed soon. Tenders have already been floated to develop the themes and the parks accordingly. 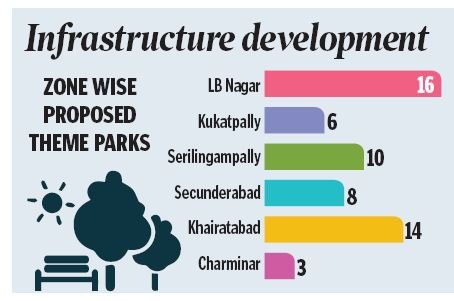 This is the first time that the municipal corporation is planning to develop such parks in the city. Though not exclusive to women, these parks will have many facilities for the convenience of women, including pregnant women. These parks will have different sections including the pregnant women’s section, workshop section, yoga and health section, entertainment, etc. These apart, there will be regular facilities like walkways, open gyms, lawns, and others, said a senior official from GHMC.

The 57 parks are being developed at a cost of Rs 123 crore. The majority of the works include engineering and civil works, greenery developed and other lawn works constitute 15 percent. Already, works have been grounded at many parks, and in about six months, they will be opened for visitors in a phased manner, he added.

Hyderabad: HMDA to host first dance festival from April 3 to 11